Book With Your Favourite Airline

Get inspired, Search and find the best flight deals from London

We have Emirates flight deals that match your needs.

The largest airline in the Middle East, Emirates is located in the Dubai International Airport. Operating services to more than 100 destinations across six continents, the modern fleet of Boeing and Airbus aircrafts make it one of the most preferred airlines in the world. Emirates has enjoyed a plethora of accolades and recognition for service excellence, service quality, and operational excellence over the years. The airline also takes pride in operating three of the world’s longest non-stop commercial flights from Dubai to San Francisco, Los Angeles, and Houston. Offering first preference to travellers, Emirates ensures passengers receive super luxury service, which are on par with world-class standards. Emirates maintains gold standards be it on comfort, privacy, or pleasure. Furthermore, the airline guarantees that its loyal customers are well taken care of, pampered and offered the best in service. Emirates boasts more than 5.72 million frequent flyer members who are given the privilege to earn mileage points as they travel and win free air-tickets to the destination of their choice. Additionally, amazing deals and offers at selected hotels and restaurants make the programme highly worthwhile. Get the best deals and special baggage allowances by booking Emirates flights with TravelCenter. Enjoying great partnerships and alliances with Emirates, allows TravelCenter to provide extraordinary rates to all travellers, to their favourite destination. 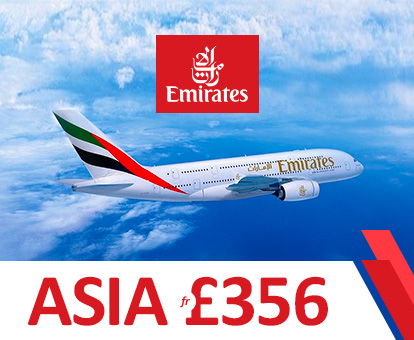 Flying with Emirates Economy Class is always a privilege. Explore the incredible features that provide space, privacy, and comfort at 30,000 ft. At every seat of the aircraft, the airline offers SMS, mobile or email service, which keeps you connected with your loved ones at thousands of miles away. Dinning in Economy Class is another luxury for the discerning travellers. Savour signature dishes to regionally inspired cuisines from award winning chefs. Mouth-watering and tempting, whet your appetite and enjoy a scrumptious meal complemented by a great choice of beverages and wines. Experience fascinating in-flight entertainment options, from movies and music to news, TV shows and games with just a touch. The ICE Entertainment system on board the aircraft ensures there are more than 1,000 channels to select from, to suit your mood and taste. Whilst paying attention to the minute details of the passengers, Emirates takes the next step of taking extra care of the young travellers, featuring fun-filled entertainment, special meals and fantastic rewards such as books and toys.
The on-demand meals, flat-bed seating and in-seat power in Emirates Business Class are designed specifically for the comfort and convenience of the business traveller. The highlight in the Business Class cabins is the reclining flat-bed seats which extends 79 inches to form the bed. Offering such comfort, travellers are also provided with extra large tables for adequate space, in-seat power supply for laptops while working, along with a personal storage and a built-in mini bar to relax. Tailored and furnished to suit business travellers, flatbeds are available in all Airbus A380 aircraft and Boeing 777 Dreamliner aircraft. Indulge in an array of dishes, including healthy options for the discerning traveller. Offering complementary beverages, cocktails, and vintage wines, the dining experience in Business Class is simply astounding and world class. Business Class privileges are unlimited, reaching beyond the service offered on the aircraft. The crew goes out of their way to make certain the journey is hassle-free. Chauffer service and lounge access are two prestigious complementary services offered by the airline.
<p> Taking the pleasure and the pride of introducing the first personal entertainment systems on a commercial aircraft, Emirates has won accolades for the best in-flight entertainment from Skytrax since the system’s inception in 2003. The award winning in-flight entertainment offers more than mere entertainment. It enables passengers to access, send and receive emails for a small fee. In addition, it also provides seat-to-seat chat service. The deal with AeroMobile allows in-flight use of mobile phones to call or text those thousand miles away. </p> <p> The in-flight entertainment system also ensures live news feeds on breaking news as well as sporting victories and losses for the discerning sport fans and the curious. </p> <p> Moreover, there are 130 on-demand movies, 15 videos-on-demand channels, 60 pre-recorded TV Shows, 350 audio channels, 50 interactive games and many more on board the aircraft, for the enjoyment of all its passengers whatever be their taste. Additionally, passengers have the benefit of accessing the ICE Entertainment System in ten different languages including German, Spanish, French, Spanish, Korean and Arabic. </p>
<p> The airline serves destinations on four continents with an extremely well-developed Asian network that includes important cities in the People's Republic of China, Japan, Southeast Asia and Central Asia. Asiana Airways serves a number of gateway cities in North America and Europe while also maintaining a limited coverage of Oceania. The first airline to develop regular passenger routes between Seoul and Tashkent, Almaty, Siem Reap, Phnom Penhand Koror, Asiana Airways has a well-connected route network. Apart from the regular routes, Asiana also has served a number of seasonal charter routes from Seoul to particular tourist attractions such as Brunei, Nha Trang, Qiqihar and Zhangjiajie. </p> <p> Asiana Cargo, the airline's subsidiary for cargo, also has a wide network, especially in Europe and North America, and currently serves some of the cities for which Asiana does not offer regular passenger services, such as Brussels, Vienna, Milan, Atlanta, Dallas/Fort Worth, Miami, Portland and Oslo. </p> <p> With plans to launch a new passenger route between Seoul and Wuxi by December 2013, and trying to achieve a new traffic right for a Korea-Mongolia route, Asiana is also considering larger and more investment in Seoul-Central Asia routes, including launching a new service to Bishkek, Kyrgyzstan, by February 2014. </p>

Emirates has won a record-breaking number of awards for its world class service, the state of the art travel classes and service excellence. Enjoy a glimpse of the different accolades won over the years:

Make sure to check out our Tips